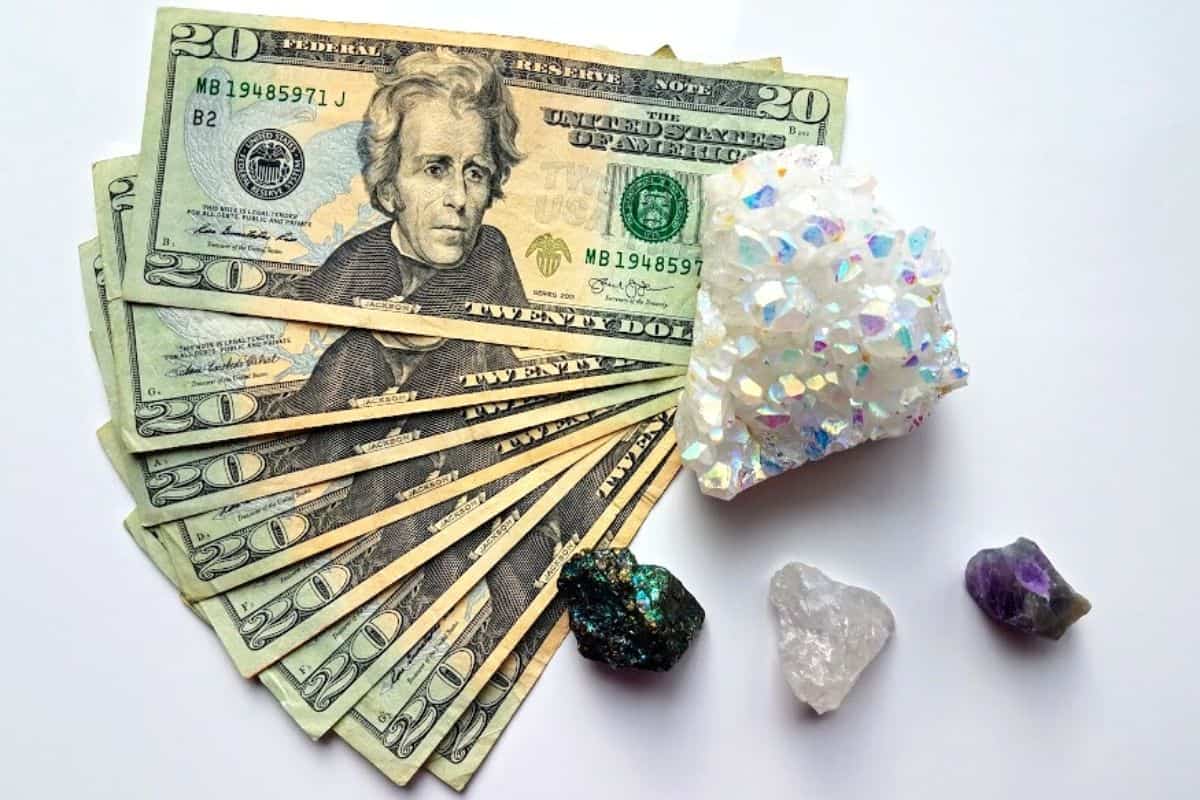 Do you suspect your limiting beliefs about money are keeping you from experiencing the financial abundance you want? You’re in the right place. Here you’re going to learn how your limiting money beliefs have been showing up in your life, and how to start healing them so that your money reality can start to change for the better.

We all know how important money is. Having money brings security, it opens the door to new experiences, it helps you to fix certain types of problems, it gives you access to healthcare, etc.

If you don’t have enough money your quality of life can be significantly lower and it causes a lot of stress. You may not be able to have all your needs met and there are a lot of things that are off limits to you.

It’s easy to blame not having money on the government or society or rich people hording it all, and there are serious issues with all of those things, but we’ve all heard stories of people who came from rougher backgrounds than ours that have “made it.”

What did they have that you don’t? It’s not luck or special talents that you could never hope to have. It’s their belief system and a money mindset that is empowering instead of limiting.

If you know that you don’t have a positive relationship with money because it causes you nothing but stress and pain, it comes from having a lack mindset and that is the result of the beliefs you’ve formed in the past.

Where Do Limiting Beliefs About Money Come From?

A lack mindset really comes from fear. Whether that is fear of not having enough, fear of having wealth taken away from you, or fear of not being able to handle it because you don’t trust yourself.

With few exceptions, we’ve all experienced hardship with money, or we come from a family that has.

Or maybe you didn’t struggle with money as a kid, but you experienced something else that taught you that you weren’t worthy of money, safety, or success.

Maybe as a child you saw your parents fight over money and it made you feel unsafe so you associate money with danger. Maybe every time you wanted something from the store you were told, “we can’t afford that.”

Perhaps adults in your family would complain about rich people or the government being greedy and taking their money.

This taught you that there isn’t enough money for everyone, or that someone will always take your money from you, or that some people are worthy of it and other people aren’t. It created limiting beliefs about money in your subconscious mind and you’re acting on those beliefs without being aware of it, or understanding why you do what you do.

How the Subconscious Mind Rules Your Finances

Then we grow up and start making decisions for ourselves and interacting with the world that exists outside the bubble we grew up in. We start making withdraws from our subconscious piggy bank (our belief system) in the form of our choices.

Those decisions are created in response to what the conscious mind sees in the world. The conscious mind tries to use logic when it processes what we see and hear in order to make the best choice, but it’s heavily influenced by those old beliefs we formed as kids when we weren’t able to apply logic to our experiences.

So every choice we make is filtered through our belief system. The part of you operating from the conscious mind sees how beneficial it would be to make more money each month, but your subconscious beliefs are like, “nope! That’s not allowed because money is a limited resource and we’re only allowed this much.” And so it fights your conscious desires, without you even being aware of it.

We think the conscious mind (the part of you that is aware and thinking right now) is making all the choices, but studies have found the the subconscious mind makes decisions up to 10 seconds before we’re even aware of it.

The subconscious mind makes 95% of our decisions, so when you have a lot of limiting money beliefs rattling around in your brain, they’re showing up in your life every day.

Signs You Have a Lack Mindset

How do you know you have a scarcity mindset formed by those subconscious beliefs? Here are some signs:

How to Heal Your Limiting Money Beliefs

You might be feeling a little overwhelmed right now, but the good news is that we can reprogram our limiting money beliefs. Our brains are not unchangeable and neither are our beliefs.

Thanks to neuroplasticity we can build new neural networks in our brain, so you can go from stressed out when you see a bill to feeling confident that you’ll always have enough money to pay for anything that comes up.

Here are the steps to overcoming a lack mindset.

1. Identify Your Limiting Beliefs Around Money

Think about any negative associations you have with money, through personal experience or the filter society sees money through.

Ask yourself some questions and write down the answers:

You have to dig deep and be willing to be really honest and vulnerable. Do this reflection with self-love, there’s no need to feel shame about your money beliefs.

2. Change Your Perspective Around Wealth

After you’ve identified some limiting beliefs about money, you have to change your perspective.

Looking at your limiting money beliefs, what would be the opposite belief? What belief would a wealthy person have?

If there was a really wealthy and empowered version of you in an alternate reality, how would they think, feel, and act around money? Get into that headspace, write down how that person feels about money.

Look at how you talk about people with money, and see if you can look at them in a new way. Here are a few examples.

If you’ve ever looked at a wealthy person and thought that money made them greedy or evil, realize they were already that thing with or without money. If they lose all their money they’ll still be greedy or evil, it’s not money it’s them.

What if more good people with money created more good in the world? What if you could be one of those people who make the world a better place with your money? Imagine living in that world and decide that it’s possible for you.

Related: 7 Money Blocks You Probably Have

And I know that I can spend that money on something special in the future, which feels really good!

Just look at your beliefs and ask “how can I look at this differently?” The answer might not come right away, so come back to your limiting beliefs later to see them with fresh eyes.

Reprogramming beliefs can be easier said than done. Sometimes all it takes is realizing you have a really silly belief to dismantle it, others take more work.

This is why I created my 21 day program Magnetic Money Manifestor, to help people overcome those old beliefs and start attracting the wealth they want. In this program we go deep into how to reprogram the subconscious mind, with lots of practical tools that have a big impact.

How are you already abundant?

Your first answer might be, “ma’am, I am NOT abundant right now!” and hey maybe your bank balance is in the negative and you’ve got bills stacked up, that’s ok.

But, money isn’t the only form of abundance.

Abundance can be having great friends, having nature around you, a fabulous shoe collection, a car that works, a roof over your head, food in the fridge.

There is more to being abundant than having a certain number on your paycheck or in your bank account.

That doesn’t mean money isn’t a big deal, we need it to get by and have certain experiences in life, but taking the time to appreciate all the other forms of abundance goes a long way to getting into the right mindset. And when the money you want does come in, you’ll appreciate it that much more.

As a bonus, it trains your subconscious mind to look for other ways to receive good things, because your brain will look for more of the things that are important to you.

4. Be Patient and Work at Maintaining an Abundance Mindset

Just because you start changing your mindset around money and dismantling those old limiting money beliefs, doesn’t mean the cash rolls in right away.

Remember, there’s no law written in the sky that says YOU don’t get to have wealth. You’re just as worthy and deserving as anyone else of as much money as you want.

So keep working at shifting the way you’ve been thinking about money. It won’t be cemented into your subconscious right away, but with time and repetition you will start to change your belief system. Then you will start to automatically take actions to create that wealth.

It can take time to find ways to increase your income, and it’s natural to be impatient and get frustrated when the money doesn’t show up. Just keep doing the inner work, and not just because you want money but because you want freedom from those limitations.

The seed you plant doesn’t bare fruit the day you plant it. Don’t lose hope when nothing seems to be happening.

5. Look For Opportunities to Create and Receive Wealth

The great thing about changing your belief system and creating beliefs about money that are empowering is that you will start to find ways to make money without even thinking about it.

Your old limiting money beliefs caused you to block out opportunities to make money. They were there, but you couldn’t see or act on them because your beliefs create a filter that distorts reality (as you perceive it).

For example, in 2018 my intuition was like “hey Katrina, you should start a blog,” and my limiting beliefs said, “no way, you don’t have anything useful to share with the world and it won’t make any money.” So I didn’t start a blog that year, but I was still doing inner work on my beliefs and a year later when my intuition knocked on the door again and told me to start a blog, I was able to believe in myself and start A Point of Light.

Related: Learn How to Start a Blog

Doing the inner work didn’t produce immediate results, they built up over time and eventually I could see opportunities I had ignored before and take action.

So as you do work on your money beliefs, be open to thinking outside the box. Be willing to get uncomfortable.

When your old beliefs pop up and say, “that’s not possible for me” gently correct them. You might adopt a mantra of, “I’m ready to receive wealth in new and unexpected ways.”

Be willing to receive money in ways you hadn’t thought you could before. Say yes to opportunities you said no to in the past.

Keep doing the work and be ready to take action when your intuition says, “hey, this is the way forward. Let’s go.”

Related: How to Tap Into Your Intuition 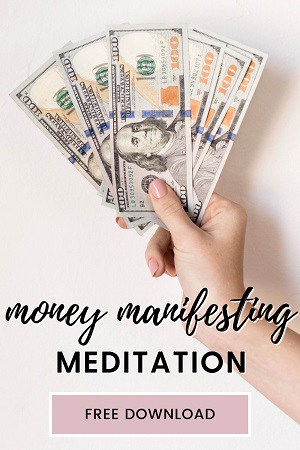